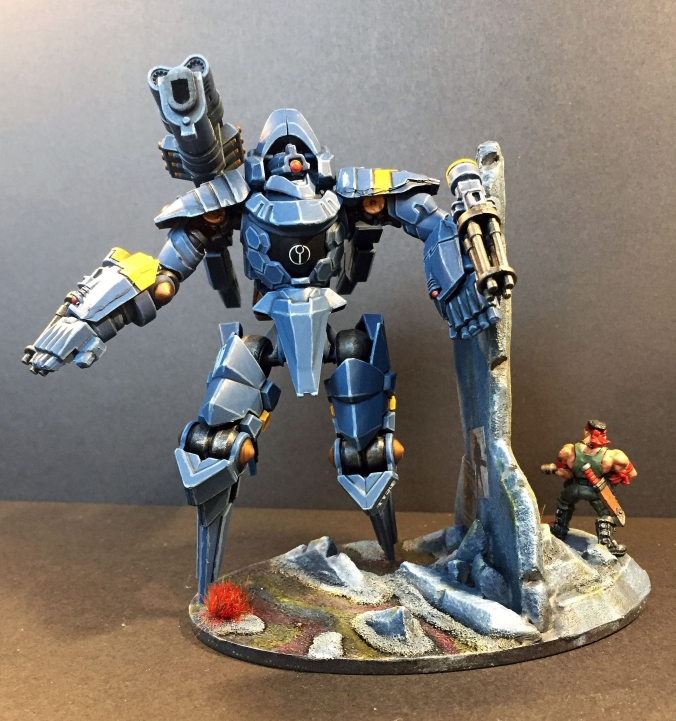 With one eye on an upcoming tournament at then end of December (more on that later), I have started working on my list and trying to evolve the army that I took along to Seeds of Destruction earlier this year.  Forgeworld is not allowed this time around, which leaves a y’vahra shaped hole in my force.  While the absence of the big boy will hurt, the plus side is that this does give me lots of points to play with, and the opportunity to experiment with some new stuff.

Lots of ideas have been churning through my mind (Vespids!), but the one unit that keeps coming up time and time again is the Ghostkeel.  Having seen much praise heaped on this unit in batreps and forums, I am keen to see what all the fuss is about. Unfortunately, my recent cold turkey declaration on buying new models means I can’t just go out and get one.  Lucky then that I have had a suitable model awaiting conversion for a very long time…

When living n Hong Kong, I had the pleasure of vising many a model shop that almost exclusively stocked Gundam / Gunpla style battlesuits.  These were usually awesome models, and very reasonably priced when compared to GW stuff.  The potential cross over with T’au wargear was obvious, and as a result I picked a few up with an eye to converting them to the greater good at some point in the (far) future. 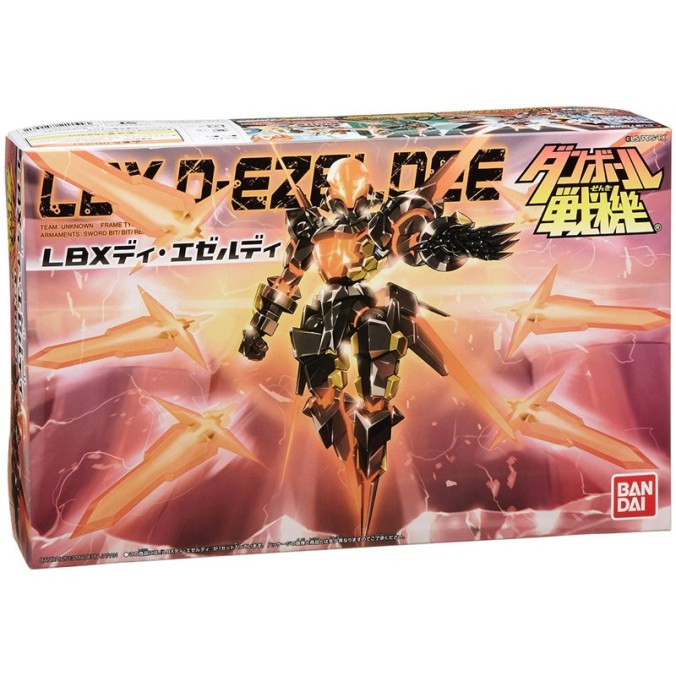 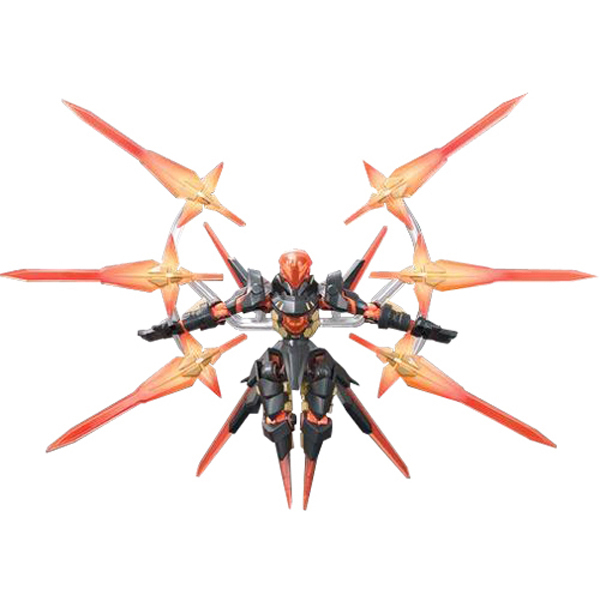 As you can see, he oozes awesome as he is, but I had no desire to just build him and have him sit on my shelf looking pretty.  I wanted him in my T’au army, and so I got cracking (literally!). 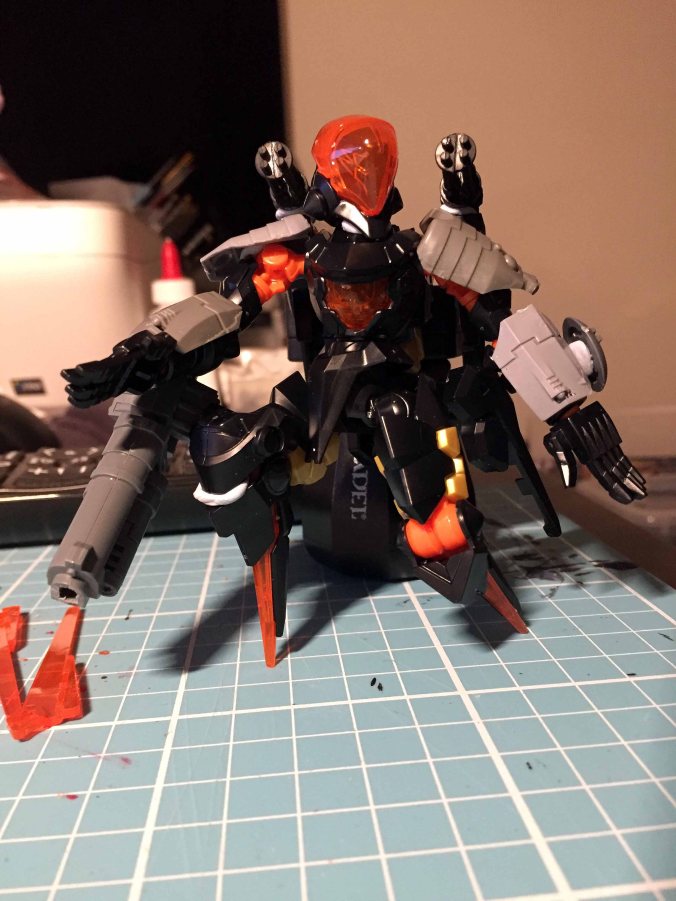 I guess this is not so much a conversion as a kit bash – while I did have to pin some joints and other pieces to get the pose I wanted, there was a lot of substitute parts added from my T’au spares, as well as some repurposing of bits that came with the Bandai kit.  Size wise it was a little bit taller than a GW Ghostkeel, so I decided to give it a crouching stance to keep it roughly the same height. 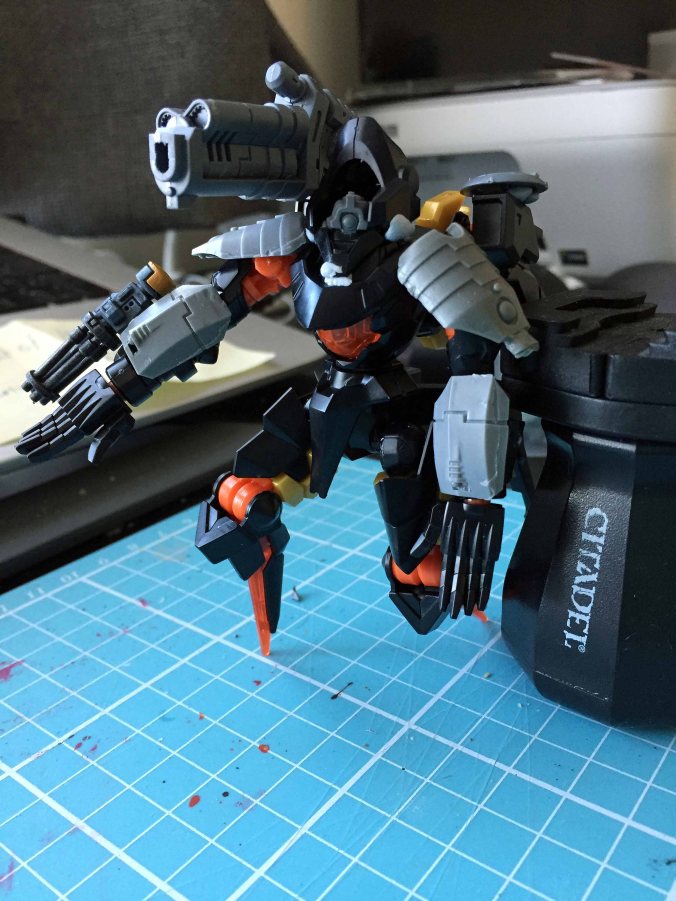 I also wanted to do something special with the base – I like the idea of the big suite nimbly creeping through the ruins, outsmarting his smaller but dumber imperial prey.  As he was already crouching, it would be perfect for a base that told a bit more of a story. 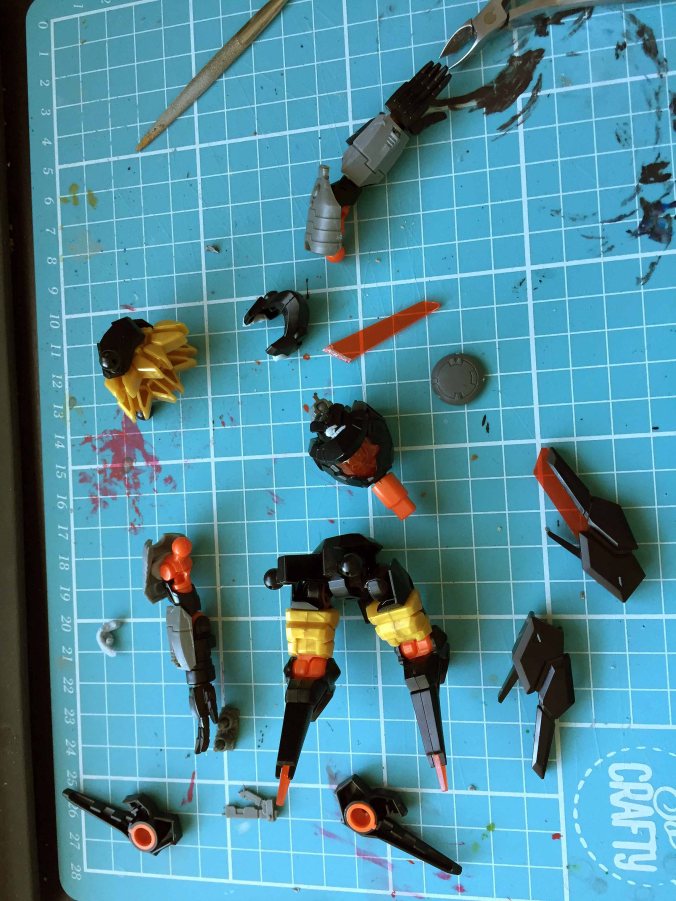 With that settled, I got on with the sub assemblies and started to put the battlesuit together! 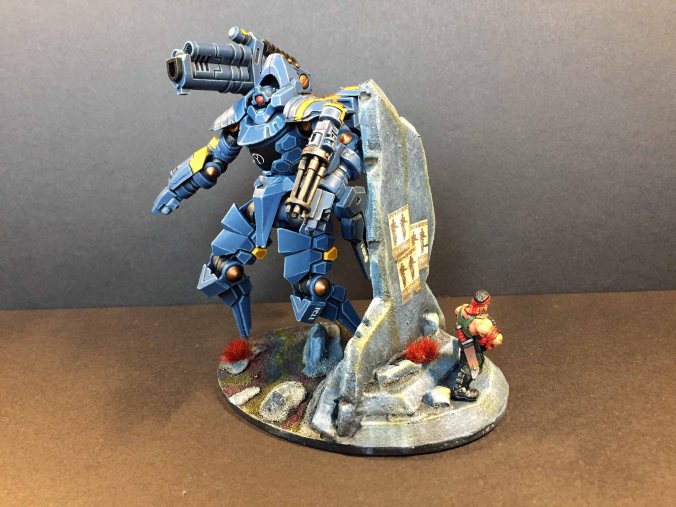 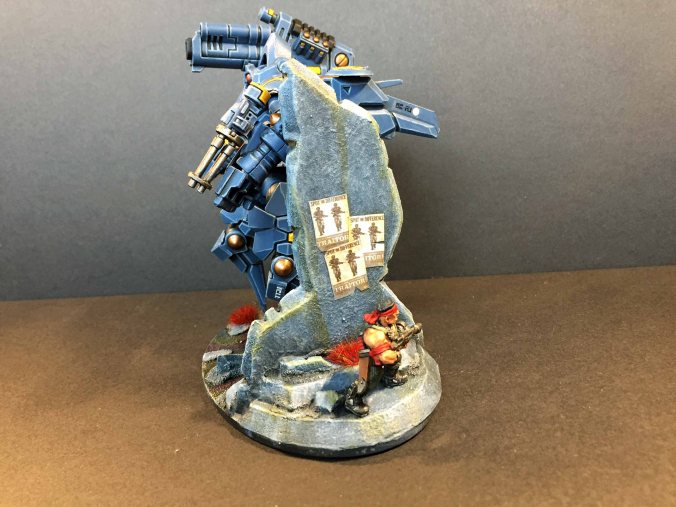 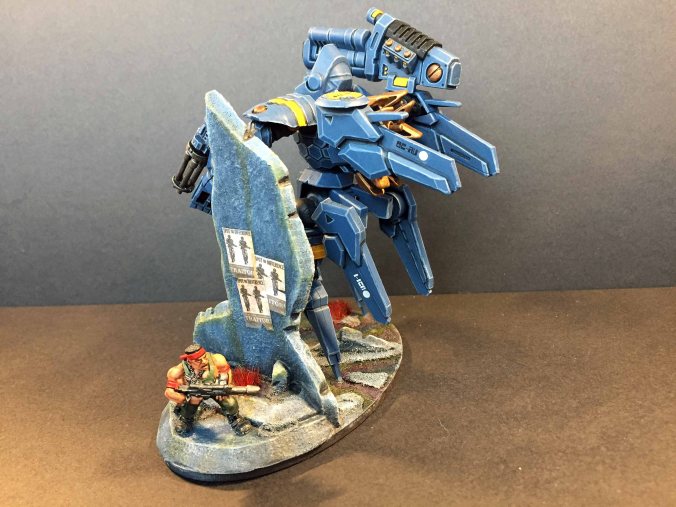 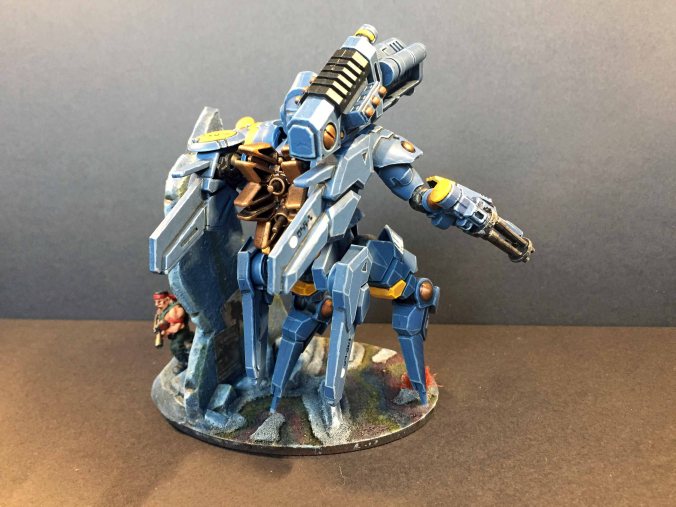 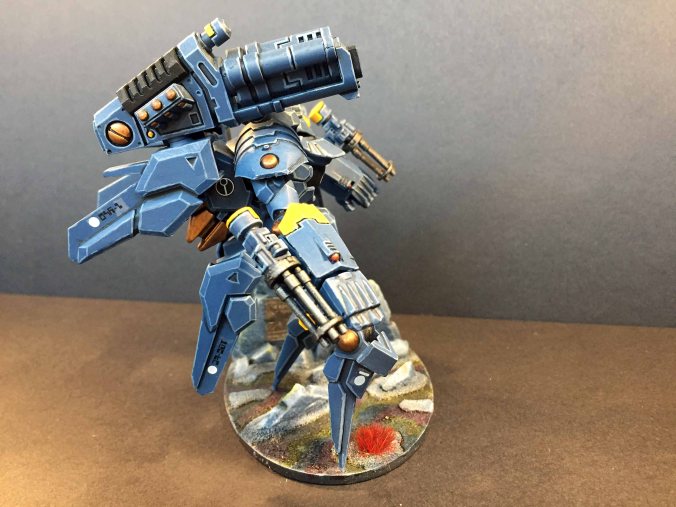 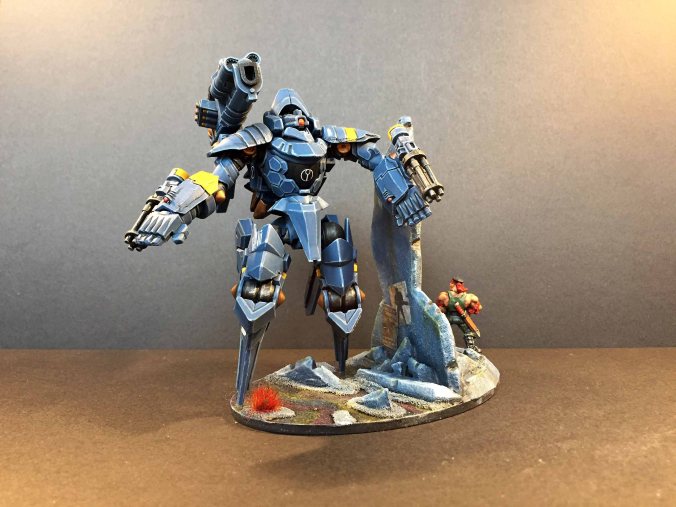 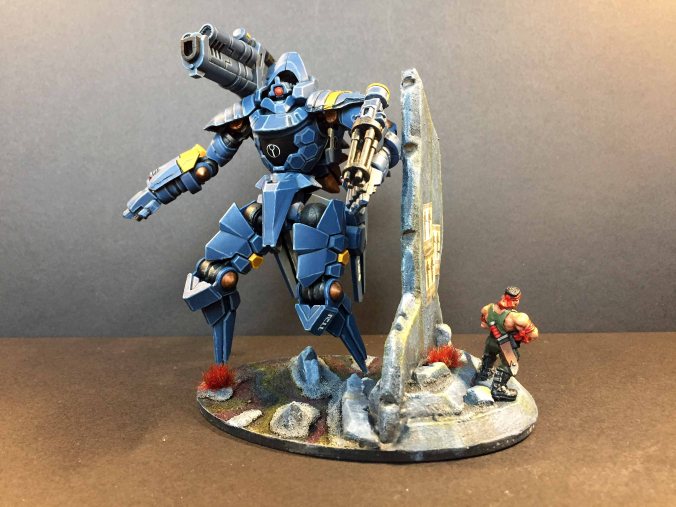 It’s fair to say I am all kinds of delight with this.  While I know cross overs are not everyone’s cup of tea (and not normally mine either) I think I’ve managed to do enough with this chap to make him look like a fully paid up member of the Greater Good.

On a technical level this is probably the best miniature I have ever painted – I really took my time getting the pin washes and edge highlights neat and tidy and it definitely paid off.  It is magnatised too so I can still use all the other load outs if and when I want to experiment further.

The base has also worked out better than I thought it would – the poor guardsman is just a spare metal cattachan mini I had left over from an ebay mixed lot, but he helps to balance the base as much as give the whole thing a slightly dioramic feel.  The mini posters are also great – I got them online somewhere and will post the link if I can find it – but again they were super simple to do but add loads to the feel of the model.

There were of course a few failures – some of the transfers have not come out well, and the ‘pool of promethium’ look I was going for under the ghostkeels feet didn’t exactly work out, but I am not yet at the stage of trying my hand at using resin!

With him done all that’s left to do are the accompanying stealth drones, and he will be ready to take to the field (so long as the tourney organisers approve!).

Oh, and of course I get to give myself a bit fat stamp of approval, as he was on the to do lists for the last three years – hurrah! 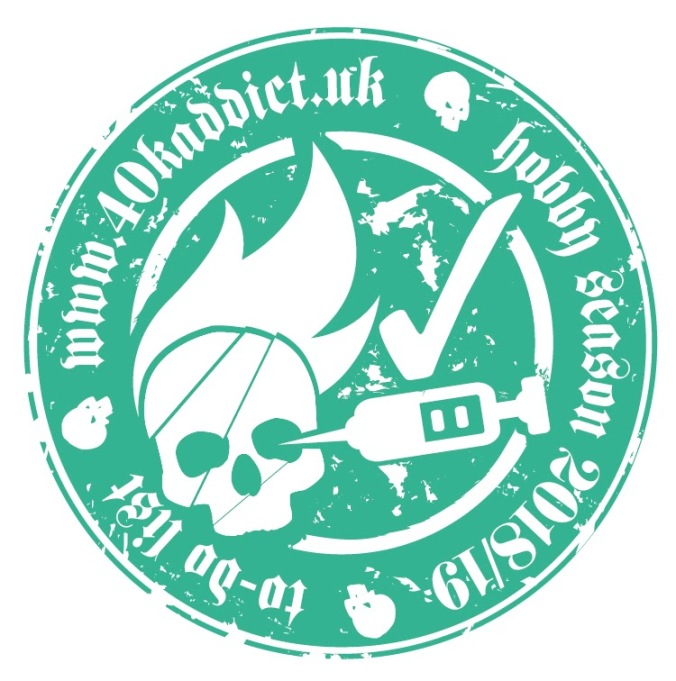